Automated bilayer formation: Take the pain out of painting

Despite its proven value, traditional bilayer recording can be very frustrating due to the capricious nature of lipid bilayers, which have to be formed manually one by one and often lack stability. Ionera´s technology speeds up the entire process by the rapid and simultaneous formation of multiple, highly stable micrometer-sized bilayers using microelectrode cavity array (MECA) chips. At the push of a button, 16 bilayers are ready for your experiment. And if one breaks: just push the button again and get a fresh start!

Every MECA16 chip has 16 microelectrode cavities (MECs) in its center. Each of those MECs is equipped with an individually addressable micro electrode - a key feature for low noise DC recordings. On top of each cavity a lipid bilayer can be formed in an automated manner such providing a matrix for the reconstitution of a large variety of membrane proteins. As Ionera´s technology is based on microchip technology, the spacial requirements for a single bilayer array setup are very small thus leading to a high integration density of MECs. This is not only resulting in a low sample consumption but rather leads to a minimized capacitance of the whole system, enabling users to record with higher bandwidth. 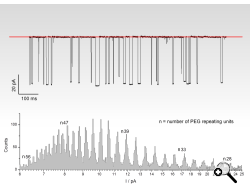 MECA supports high-resolution polymer sizing with a single biological nanopore (alpha-hemolysin) - one of the most exacting tasks in bilayer recording - in a parallel format. Ionera believes that this will prove to be a highly enabling technology for bilayer and nanopore research due to the ease of bilayer formation and signal to noise quality of recordings. Thanks to the parallelism of the recordings, the researcher can obtain data and statistics from one single run.